The Asparagaceae family includes the huge genus Hosta, which has more than 70 species and hundreds of cultivars and varieties. Hosta is a member of this family. Hostas are herbaceous perennials that thrive in shade and are planted for their leaves rather than their blooms;

nonetheless, they still provide a remarkable range of coloration options. The color of the leaves may range from blue to yellow to green. In addition, colorful hostas have a wide range of coloration, these luminaries of the plant world often exhibit a variegated pattern.

Hostas are a kind of plant that may be used as an effective ground cover in vast shady garden areas. They cover the ground with a blanket of gentle color while also preventing the growth of weeds. There are very few plants that are simpler to care for, however, they are among the most vulnerable to having their leaves damaged by slugs and snails. After they have become established, hostas may be easily propagated by separating the root clumps in the spring or autumn. This can be done.

The following is a list of 12 Colorful hostas plants that cover a wide range of leaf colors.

Hostas have a well-deserved reputation for being simple to cultivate, but they won’t live up to that reputation unless they get an adequate amount of water and are grown in soil that drains properly. In addition, they need a higher level of nutrition than you would anticipate for a plant that isn’t produced for its blossoms in most cases. The American Hosta Society suggests using a slow-release fertilizer once per year as a yearly feeding.

Colorful Hostas for a beautiful Garden 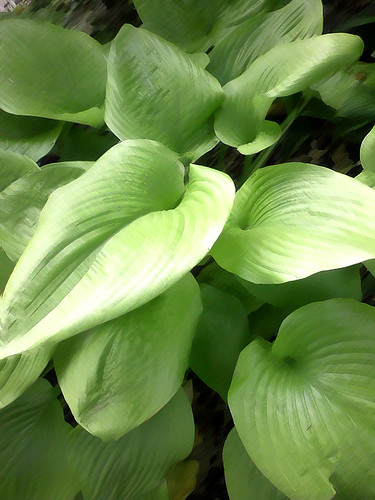 In addition to the more common green hostas, you’ll also come across various varieties with yellow leaves, whose shades may range from chartreuse to a bright golden yellow. One of the superior types is called ‘Ground Sulphur,’ and it is a low-growing plant that may spread to a width of a little more than 1 foot. It is possible that slugs and snails will do more harm to it because of its modest growth, in comparison to bigger types.

During the summer months, heart-shaped, sulfur-yellow leaves and spreading mounds of crumpled foliage are joined together to create this plant. This hybrid is a great choice for use as an edging plant. In general, the yellow-leaved hostas need more sunlight than the green- or blue-leaved types do in order to achieve their most vibrant color. 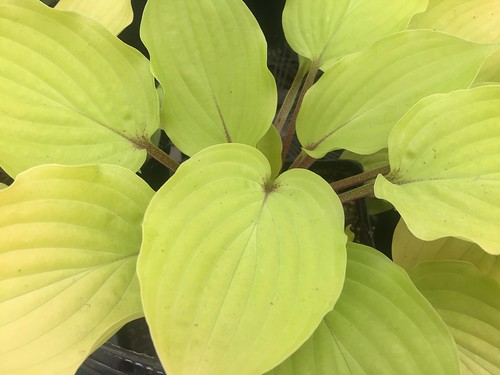 The leaves of the ‘Fire Island’ hosta are a dazzling yellow when they first emerge in the spring, but as the summer unfolds, they become a more chartreuse shade. When plants reach maturity, their leaves get a wavy and wrinkled appearance. In contrast to the majority of yellow hostas, this cultivar is not tolerant to a great deal of sun. If it spends most of the day in the shadow and only receives direct sunlight in the morning, it will not develop its full-color potential. Lavender blossoms occur around mid-summer. 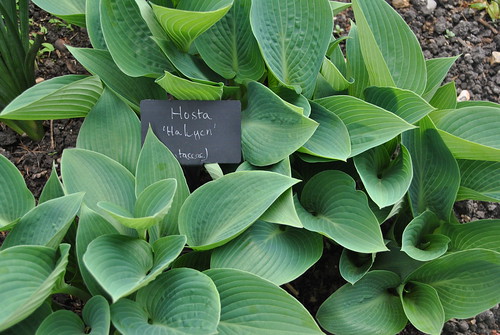 The Hosta ‘Halcyon’ cultivar is a member of the Tardiana group, which also contains cultivars of other parent hybrids. The plants that belong to this category are often cultivars that have big leaves and have a bluish-green coloration on their leaf surfaces.

The ‘Halcyon cultivar, which has a modest rate of growth, is considered to be one of the best and most popular in its category. It is a plant that stands upright and may reach a height of approximately 14 inches. It has blue-green leaves that are spear-shaped and strongly textured.

The feel of the leaves is similar to seersucker, which is a kind of cloth. This plant’s foliage, unlike the foliage of certain other plants with a bluish-green hue, is not susceptible to color loss even in the sweltering heat of summer. Mid- to late-summer is when the ‘Halcyon’ cultivar produces its lilac-blue blooms on stalks that are 26 inches tall. The blossoms of this plant are enticing to hummingbirds and bees. 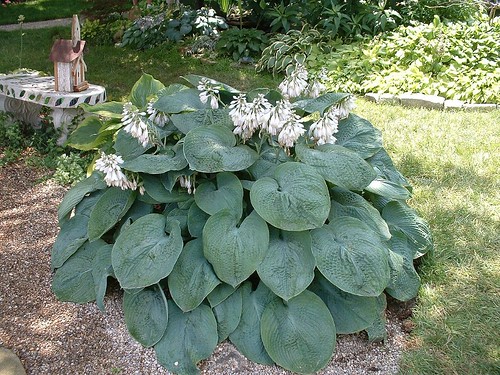 The genus ‘Elegans’ refers to a huge, spreading plant that may reach a width of up to 4 feet. The huge, heart-shaped leaves have a glossy appearance and a densely textured surface. Their color may range from green to blue-green. In the late spring and early summer, stems of 36 inches produce blooms that have the appearance of a funnel and are pure white with a blue cast. This plant grows very gradually, and it might take many years before it reaches its full size and form. 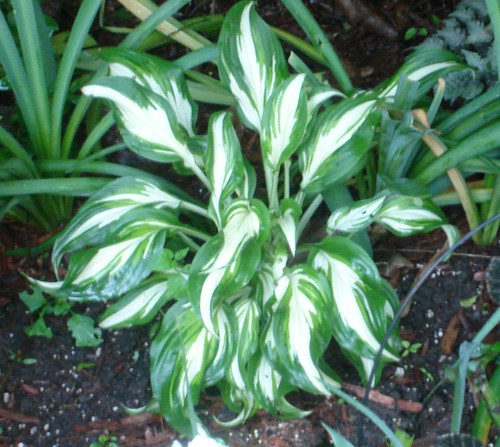 Both “undulate” and “Variegata” are generic adjectives that may be used in the naming of any number of different hosta cultivars. The former describes a plant with foliage that have edges that are wavy or rippled, while the latter describes leaves that are bicolor, consisting of a center color that is surrounded by a color that contrasts with the border. Hostas that are variegated often have green leaves with white or yellow borders.

When the lighter color (white,  yellow, or light green) appears in the middle of the leaf, we call the variegation pattern on the leaves “Medio variegated.” The variety known as “Undulata Variegata,” for instance, has a white center and green edging on its leaves. At the beginning of summer, these plants will yield lavender flowers. 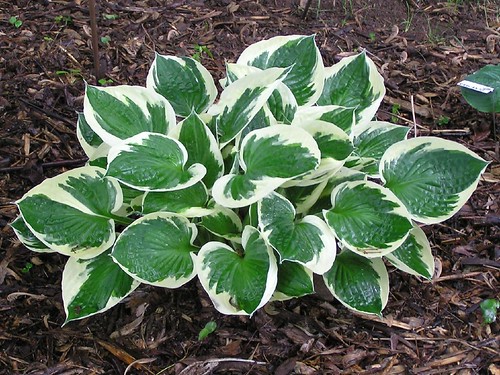 The Hosta Minuteman, with its rich white borders, is a beautiful addition to any shade garden. It is an excellent container plant and will stick out among other hostas in any shaded garden setting, whether they are all plain green or not. This particular hosta is among the few varieties that can tolerate more sunlight, provided that the plant is well hydrated at all times.

The Hosta Minuteman is the ideal plant to choose if you want to make your shade garden the focal point of the yard. Because of the contrast between the bright white borders of the leaves and the deep green of the veins, this plant stands out in the garden.

The patriot hosta is a cultivar of the hosta plant family, which is one of the most common and widespread plant families. It is mostly planted for its leaves. Hostas are well-liked additions to shadow gardens, where they grow with very little attention or maintenance and are said to have originated in Russia and Asia.

The foliage themselves are broad and spherical, and they have a corrugated texture with a tip that is rounded rather than pointed. The patriot hosta will begin to produce long stalks that reach beyond the leaves in late spring or early summer. These stalks will finally explode in light purple blooms, which pollinators like. 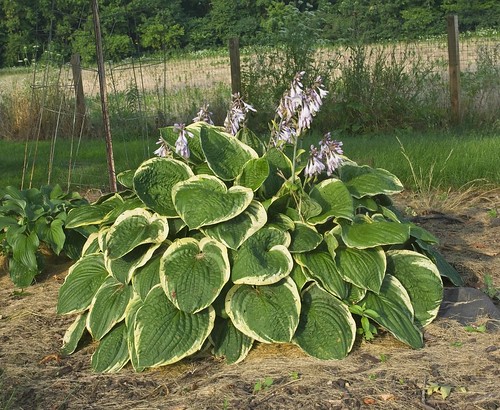 Frances Williams hosta plants are highly regarded for their use as foliage plants and landscape fillers. These hostas are native to Japan. Because of its thick, variegated leaves that are oval in form and may grow to be as much as a foot long, these hosta plants are one of the most popular varieties available. A jagged, yellowish-greenish edge surrounds the bluish-green core that lies in the middle of each leaf.

The Frances Williams hosta will thrive at a decent pace, reaching full maturity in 2 to 4 years from the time it was planted, although it will look good in your landscape well before that time. The best time to plant it is in the springtime or early fall (and before any rainy season in your area). 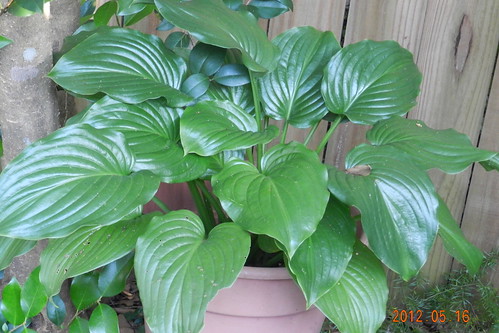 The Hosta plantaginea is an exception to the rule that hostas. Usually are planted for their leaves rather than their blossoms. If given enough sunlight, this kind of hosta is believed to have some of the most fragrant and extraordinarily big white blooms of any of the hostas.

If this species is grown in full sunlight, it blossoms in late summer. During the remainder of the year, plantaginea grows into a thick ground cover that may extend for up to 2 feet and has shiny, heart-shaped leaves that are a medium-green tone. It is simple to care for, much like the majority of hostas, but since it expands more quickly than other cultivars, it has to be divided every few years. 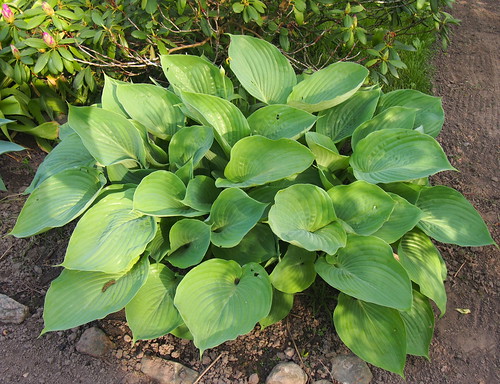 The plant is known as ‘Sum and Substance’ and may grow fairly big, reaching heights of up to three feet and spreading out to a width of up to five feet. The very big, heart-shaped leaves range in color from yellow to golden and are glossy and deeply textured. This is a classic golden hosta, and in order for it to display its full color, it requires a good deal of sunlight. In the late summer, fragrant blossoms in the form of bells bloom on stalks measuring 38 inches. This hosta variety, which has won several awards, is considered to be one of the top yellow varieties. 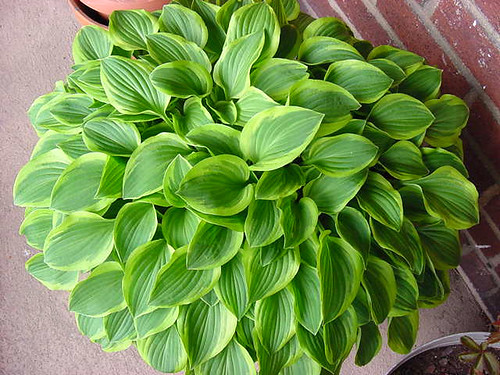 ‘Golden Tiara’ is a plant of medium size that grows to produce a spreading mound that may reach a width of up to 38 inches and has leaves that are broad and heart-shaped with uneven golden-yellow borders. The plant produces funnel-shaped, purple flowers on stalks around 25 inches tall at the end of the summer. It is known that ‘Golden Tiara’ can tolerate dry soils better than the majority of other hosta varieties. 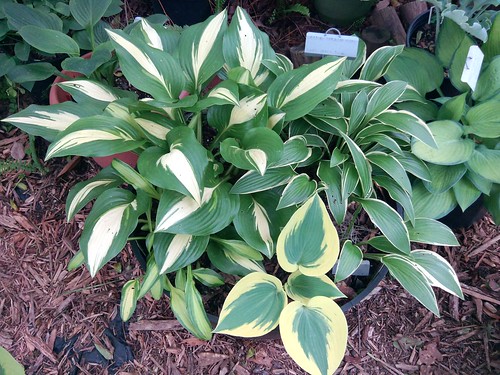 A hybrid among H. tardiflora and H. sieboldiana ‘Elegans’ gave rise to the Tardiana group of hostas. This hybrid was named for its elegant appearance. All of these cultivars have blue leaves, and they do their best growing in almost complete shadow. The ‘Blue Moon’ plant is a dwarf variety that blooms with white flowers in the late summer and has heart-shaped leaves that are bluish-green in color.