Plant Pests: How to Identify and Control Is your plant eaten up by something in your absence (maybe night) and you are unable to identify who is eating your lovely plant.

When we grow plants in the house indoors or outdoors. We often encounter suspicious creatures that eat or damage our growing plants, eating leaves or stunting their growth.

These tiny creatures are nothing but pests that love to feast on healthy green plants.

The problem, there are so many pests, that it is difficult to identify which one has attacked the plant. Here, I listed some common plant pests that most probably affect your plant growth. We will discuss how to identify and control these pests to save your gardening environment.

Aphids are tiny sap-sucking insects that infest plants. These insects are too tiny which makes them very difficult to spot.

Also, they often hide the underside of the leaves which makes them more different to spot. Aphids infest a plant in hundreds of numbers. It has a rapid life cycle that multiple them in thousands within a few weeks.

A typical life cycle begins with adult female aphids that give birth to female nymphs, who may also be already pregnant without the involvement of male aphids this leads to very quick reproduction.

Aphids have nearly 400 species all in different shapes, sizes, and colors. It is a member of the superfamily Aphidoidea, also commonly called greenfly and blackfly, these names are given because of its body color including green, black, white, red, orange, and yellow.

This plant pest sucks plant juice causing it to lose plant nutrients which stunt its growth and eventually die.

You can identify whether your plant is affected by aphids – looking misshape, curling, yellow, or stunt leaves. These are common signs of aphids present, also check the underside of the leaves.

Aphids love to hide there to protect themselves from sunlight and pest predators. If your plant stem or leaves are covered with sticky fluid, that also points to aphids. The sticky substance is honeydew, it is sweet and attracts other insects like ants to eat on plants.

If you find these signs in your plants, it is essential to get rid of aphids immediately. 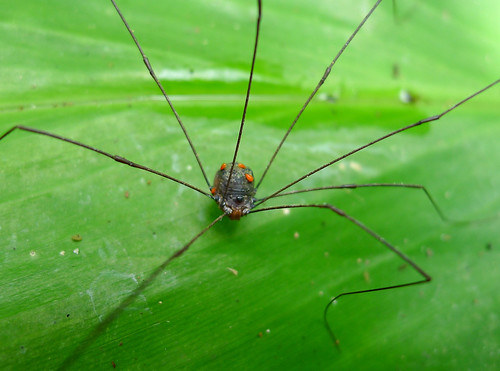 Spider mites are tiny 8 legged insects. It is a micro-organism that is invisible to naked eyes. This insect belongs to the Acari family TetrantychidaeI, which has around 1200 species. Many species of spider mites are so common in North America that they often attack indoor and outdoor plants, especially greenhouse plants.

Spider mites damage by sucking the plant’s juice that causing tiny spots or stipplings on the leaves. They infest in hundreds on the plant but, then also remain invisible to naked eyes.

You can identify spider mites’ presence by webbing on the leaves and branches of the plants.

Spider mites reproduce quickly by hatching eggs in hundreds in a day. So it’s vital to get rid of spider mites quickly. There are many natural and chemical methods for spider mites treatment. 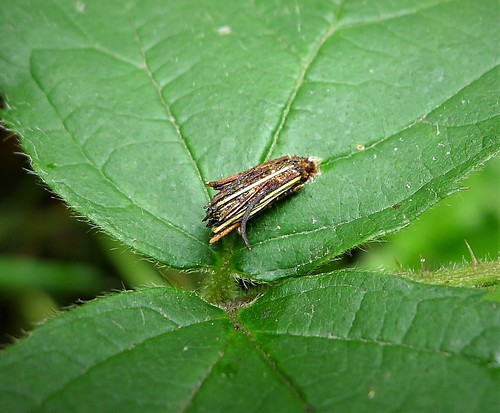 A bagworm is a moth that feeds on shrubs and trees in its larvae stage. This is a peaky plant pest with a small-diamond-shaped body, which mostly appears in the rainy season. It likes to feed on green plants, vegetables, fruits, perennial plants, and flowers.

Bagworms are caterpillars or larvae stage pests that stunt a plant’s growth by constantly feeding its leaves. They start making cocoons on the host plant. A cocoon is a bag-like structure in which bagworms hibernate to evolve. Initially, these cocoons are 1 ⁄ 8 inches long and grow bigger during summer from which caterpillars thrive.

Bagworms are not poisonous but they feast on the plant’s foliage that causing its death.

Talking about the life cycle: 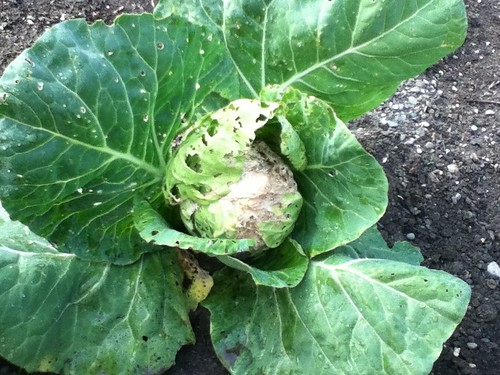 Cabbage worms are common plant pests that are mostly found in kale, cabbage, cauliflower, broccoli, and other members of the Cabbage family.

Do not worry after seeing a few holes in the foliage, vegetables can withstand much leaf loss without any consequences. The true damage from cabbage worms occurs in the early stage (seedling level). It eats all growing leaves and destroys plants’ growth.

Cabbage worms are light green and hide the underside of leaves which makes it extremely difficult to identify them on green leaves. The worm later transforms into white butterflies with tiny black making.

The insect might look appealing in the garden but sooner, it starts laying hundreds of eggs underside of the leaves. These eggs are invisible to naked eyes, so you might not see them until it’s too late. This leads to hundreds of tiny worms that will eat up your plant.

Cabbage worms can eat up all leaves of cabbage, cauliflower, or the head of the broccoli without getting noticed. They feed all foliage and happily leave the plant with stems and long veins.

Cabbage worms can easily devour your crops if do not take the required prevention. It’s vital to get rid of cabbage worms quickly. if you suspect small spots on the leaves get altered and start using control methods. 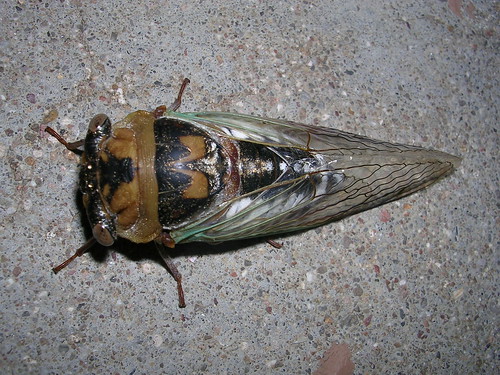 Cicadas are plant-eating insects that are 1 to 2 inches bigger in size, it has red or black eyes and transparent wings. They can fly very fast from one plant to another. Cicadas produce a dirge-like song for hours. They feed on the leaves of trees and crops in thousands and destroy them.

Getting rid of cicadas varieties is extremely difficult and requires heavy pesticides, cover your skin and wear a hat when dealing with the onslaught.

Cicadas come from the ground during the warm climate or summer. To protect your plant from cicadas often spray strong hose or wasp small trees with landscape netting.

The young cicadas will not feed on leaves but go to roots and suck put the sap of the trees. Adult female cicadas will cut into the bark of the trees and lay eggs. A big tree can survive, but not young ones may not. 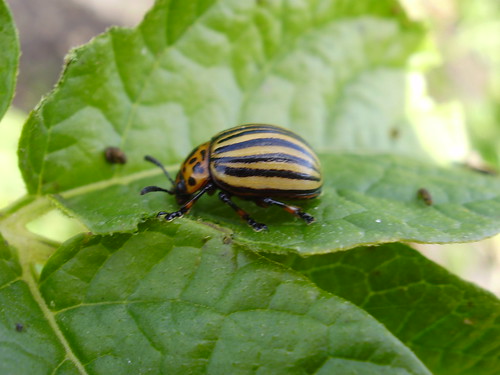 Colorado potato beetles love to feast on potato and nightshade plants which include peppers, eggplant, and tomatoes, however, potatoes suffer from the worst damage.

This insect is fairly easy to spot on plants, it’s about 1/4 to 1/8 inches in size with a black head and orange body covered with rows of black spots along the sides.

People often confuse this insect with a false potato beetle which is not a pest, you can differentiate by looking at their white and black shells.

The female beetles lay about 25 eggs each time on the plant. Once they hatch, larvae come out which destroy veggies within an hour.

It’s better to get rid of colorado Potato Beetles quickly. Once they grow adults, it’s very difficult to get rid of them because they get to adapt to control methods both organic and chemical.

So, the best weapon to tackle them is speed and vigilance, Start pest control methods the moment to see them on your vegetables. 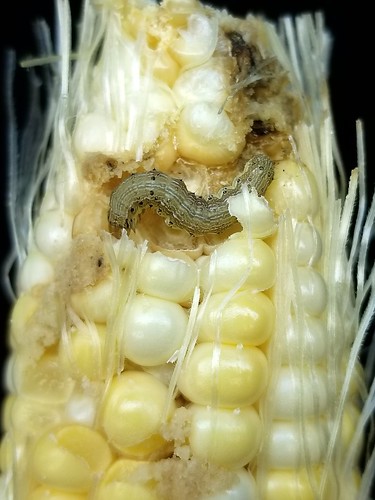 Corn earworms are a major reason for most of the crop destruction in the United States. Thousands of acres of crops are damaged every year because of the larvae of this moth and many home gardeners get discouraged by its damage.

However, getting rid of corn earworms is easier. Before their treatment first, you have to know their life cycle because treatment particularly depends on which stage it is.

Corn earworms are mostly active during the evening and at night. They are small moths of size 1 to 11/2 inches long. This pest is active during early June and searches for corn silk to lay eggs.

A single female earworm can lay about 500 to 3000 eggs. These eggs are not visible from naked eyes (each egg is smaller than a pinhead).

Eggs hatch within two to ten days, from which larvae of this moth appear. After hatching they immediately start to feed on plants. They follow the silk to the ears till they get bigger and fall to the ground. These larvae start going underground slowly and remain inside until their purple stage passes. 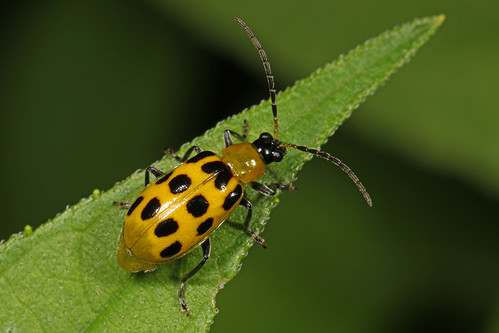 If you see small striped insects on your cucumbers then probably that’s cucumber beetles.

Cucumber beetles are small colorful plant pests that love to feast on cucurbits including cucumbers, squash, watermelons, and pumpkins.

They are mostly the reason for bad growth, they eat and stunt plants’ growth.

Cucumber beetles leave their hibernation site in mid-April to early June. Then right way feed on plants as they are emerging, usually kill themself.

Their larvae feed on host roots and veins, and gradually grow into adults from mid-July to early September. As they grow adult they keep feeding on plant’s leaves, fruits, and vines and leaves a deep mark of ruin on the host.

Cucumber beetles are not poisonous to humans but they also spread bacterial diseases and viruses from plant to plant so it’s important to get rid of cucumber beetles quickly; otherwise, they will destroy your whole garden. 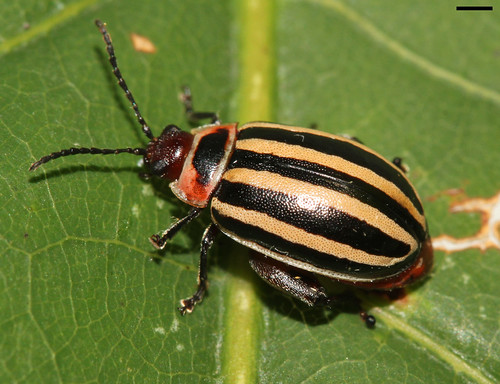 Flea beetles are small black-coated beetles that feed on a large variety of plants. Although, some flea beetle species only feed on specific plants. They can jump from one plant to another when get threatens like fleas.

If you have a vegetable garden, flea beetles will infest all around, they keep jumping from one plant to another. Flea beetles feed on any vegetables but they specifically love veggies from brassica families like Broccoli, Kale, Radish, Cabbage, and Turnips. Also, nightshades include eggplants, tomatoes, and peppers.

Flea beetle species are found in colors ranging from black to brown. Some species have mixed-bright colors and can spot easily. However, identifying them through the eyes is very difficult, they are 1/16 inch long and can flee in a second to other plants.

The best way to identify them is by looking at the damage they cause. Flea beetles feed on young plant leaves and make small holes into them.

They feed on seedlings’ leaves making small holes and laying eggs on the roots. When these eggs hatch, their larvae feed on roots. It is important to prevent them from infesting young plants.

Big and mature plants are mostly not affected by flea beetles’ leaf feeding, as they make very small holes. However, the main problem is caused by bacterial diseases they cause like wilt and blight from plant to plant. So it’s essential to get rid of Flea beetles quickly. 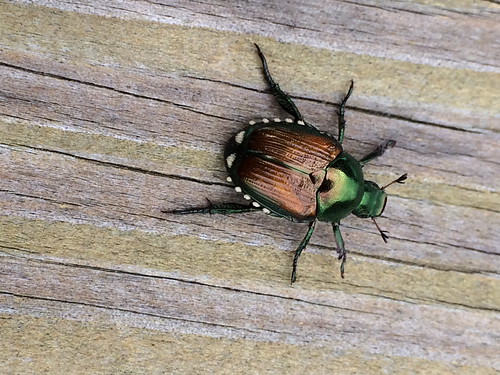 Japanese beetles are blue-green metal-coated insects. Before 1912 this beetle species was only found in Japan surrounded by water.

In 1912 the USA made it illegal to import rooted plants. Unfortunately, due to lack of implementation of the law, Japanese beetles entered the USA and spread on a large scale before being controlled. Since then every year thousands of plants get infested by them.

Identifying Japanese beetles is easy because of their bright blue-green color. Also, they feed on the plant’s leaves and make it look like a net.

These beetles feed every plant they find, in the garden they have some specific plants like roses, beans, raspberries, and grapes.

They feed on plants in groups and cover a large area to infest. Even if you manage to prevent them from your garden. They will again come back from your neighbor’s garden.