Are Mexican petunias invasive in texas?

Are Mexican petunias invasive in taxas? This question asked my many gardeners, in this article all your doubts regarding Mexican petunia growth will be cleared.

The Mexican petunia is a lovely perennial plant that may have flowers ranging in color from blue to purple and can be found at various garden stores. Due to the plant’s potential to reach heights of up to three feet, the Mexican petunia has long been employed by gardeners as a means to increase the overall height of perennial borders.

Cultivar which is not invasive 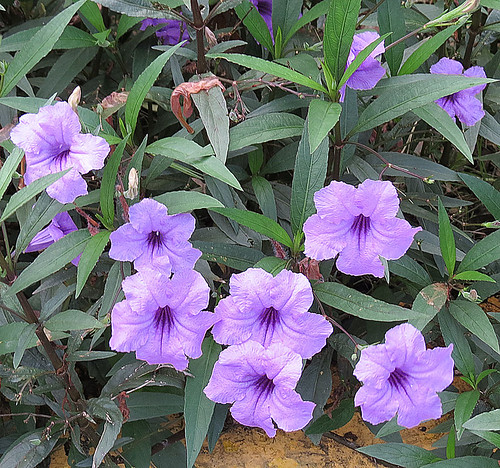 It is not recommended that you grow Mexican petunia in your garden unless you are able to get a cultivar such as ‘Purple Showers’ that has been subjected to extensive research and has been determined to not spread aggressively. There is also a wild petunia that is endemic to North Carolina called “Ruellia caroliniensis”, although it is not nearly as common. You may contribute to the preservation of Texas and Florida’s natural resources for the enjoyment of future generations by making prudent decisions and avoiding the planting of invasive species.

Related Post: How to grow and care for Mexican Petunias

In the sweltering heat of summer, this plant offers a ready supply of an uncommon color combination (purple and blue). A further advantage is that it may thrive in shaded or partially shaded environments. Although I didn’t see it spreading across neighborhoods in an aggressive manner as bamboo does, I did learn early on that you shouldn’t put submissive tiny plants alongside it since Mexican petunia would overtake them.

Cultivate in the limited place

It is recommended that you cultivate Mexican petunia in a limited place, such as one that is bordered on all sides by sidewalks, a driveway, or a patio. I’ve even given thought to removing the bottom of a 10-gallon nursery pot, sinking it flush into a bed, and planting Ruellia inside it so that it might serve as a kind of edging around the garden. This is something I’ve pondered doing.

There is also the option of dwarf forms. Katie’s dwarf, which is blue, and Bonita’s, which is pink, both reach a height of between 8 and 10 inches and are not quite as forceful as Katie’s in terms of their development and spread.

Mexican Petunia come in a variety of shades, including blue, pink, purple, and white. The individual flowers are around the size of quarters, and they only live for a single day. However, since they are produced so often, the plant constantly has an attractive appearance.

The plants are able to survive the winter in Texas from Zone 7 southward. They may be grown from stem cuttings, divisions, or even seeds if the conditions are right.

How quickly do Mexican petunias grow?

It often develops clusters of sturdy, semi-woody stalks that may grow up to three feet in height, has lovely leaves, and produce blooms in as little as a month or two after germination.

Both seeds and rhizomes are responsible for the natural propagation of Mexican petunia. The plant is capable of dispersing its little brown discs up to 10 feet away. This plant may also be reproduced by cuttings, seeds, or division, all of which can be bought.

Flowers in white, purple, or various hues of blue may be produced by these plants with very little attention. They seem quite similar to the petunia flower that most of us are acquainted with, yet the two plants do not belong to the same family. Because of the vibrant blossoms, these plants are quite popular among people who grow flowers in their backyards. Hummingbirds and butterflies are drawn to the plants.

It is one of those unpleasant little plants that toes the line between being a gorgeous ornamental and an exceedingly terrible weed. The Ruellia, also known as Mexican petunia, is a member of the petunia family. They are susceptible to being vanquished in residential landscaping, but it requires a significant amount of perseverance to get them under control.