26 Types of Poppy Flowers You Should Know In the Papaveraceae plant family, the common term “poppy” refers to at least 12 distinct genera in the Papaveroideae subfamily. Most people are aware of the liner, tissue-like blooms with vibrant, warm hues of poppy flowers, despite their complicated genetic history.

Many gardeners have attempted to plant at least one poppy variety in their plots. If you’re fortunate enough to have a meadow with an easy-to-grow species. You won’t have to worry about reseeding. Poppies may be annuals, biennials, or perennials as well as highly desired or aggressive, and simple to cultivate or frustratingly difficult, depending on the variety.

Learn more about these 26 types of poppy flowers in this post. 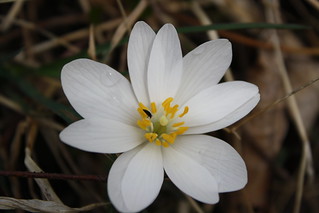 Bloodroot is a member of the poppy family, which surprises some people who study wildflowers. The foliage and flower stalks of this low-growing, stemless plant sprout straight from the soil. In early spring, it produces white flowers that are occasionally tinted with pink. Gardeners looking for a native plant for a shaded setting might consider this variety, which, unlike other poppies, enjoys the shade. This plant’s common name is derived from the color of its nectar when it is cut. 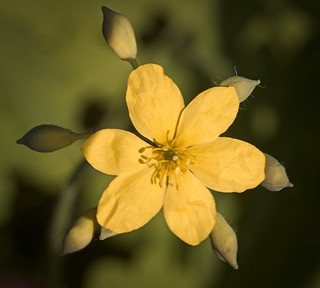 The bigger celandine, a typical roadside poppy, is hardly actively planted. Even in a well-kept garden, this aggressive self-seeder produces an abundance of yellow flowers from May through August on a compact biennial plant. It’s a poisonous invasive plant that has caused havoc over large swaths of the Midwest and Northeast.

To be clear, the smaller celandine (Ranunculus ficaria) is not of the poppy family but is instead a member of the buttercup group. As with marsh marigolds, it’s best not to grow them, although certain cultivars have been developed to perform appropriately.

Another unusual poppy blossom is the plume poppy. Long panicles (plumes) of white blossoms appear with huge curved leaves instead of the more frequent cup-shaped flowers. While the Himalayan poppy is both gorgeous and hard to grow, this one is neither beautiful nor difficult to grow it is so simple that it goes over into the invasive group. The roots and self-seeding of this perennial make it very invasive (if not deadheaded). While the plume poppy may be a beautiful yet deadly plant, many people find it to be an undesirable addition to their gardens. 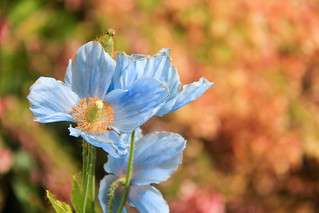 The Papaveraceae family includes Himalayan poppies, however, they don’t belong to the Papaver genus, which includes most garden poppies. However, despite their similar shape, the papery flowers have a unique, sky-blue tint, measuring up to 5 inches wide.

There is no doubt about it: It takes a long time to cultivate these plants from seed to harvest. While germinating, the seeds may be challenging, and to maintain a healthy plant, water must be provided regularly (even if plants hate getting their feet wet). Your prospects of success are minimal unless you can recreate the chilly misty forests of their native Himalayan setting. However, if you’re successful, you’ll be able to brag about your accomplishments. 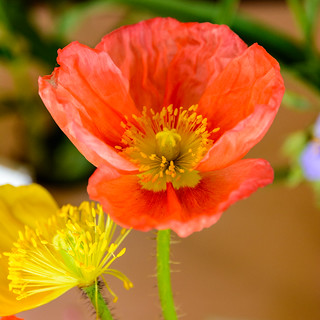 The Oriental poppy, on the other hand, is not the easiest of all poppy varieties to cultivate. Iceland poppies, sometimes known as Arctic poppies, are a good example. This is a perennial, although only in northern regions can it be grown as an annual. If you live in an area where the summers are hot and humid, you may not be able to cultivate this plant in any way. Salmon, white Bright yellow, rose, and pink Iceland poppy varieties are available. 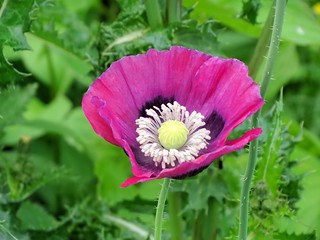 You should avoid the opium poppy, which is the source of heroin and other opiate narcotics, even though it belongs to the same family as many famous garden poppies.

In addition to its unusual gray-green leaves and higher stature than most other poppy varieties, this variety has stunning blooms in shades of white, red, pink, or purple.

It is unlawful to cultivate the opium poppy in the United States, despite its beautiful appearance.

The opium poppy’s double-flowered variety, Papaver paeoniflorin, is likewise beyond limits. Poppy seeds are widely available from major seed merchants, although few make any indication of whether or not they are allowed to sell. Check with your local and state authorities before planting this plant. 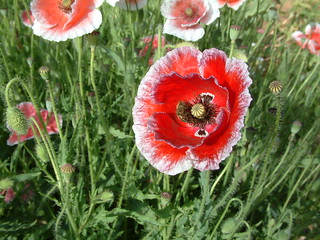 The Flanders poppy, also known as the common poppy, bloomed naturally on World War I battlefields and became a war emblem after being mentioned in the poem “In Flanders Fields.” Remembrance Day is marked in the United Kingdom by the wearing of a brilliant orange-red flower. There are several varieties of the Shirley poppy available in a variety of colors for the landscape.

Despite being an annual, the Flanders poppy and its varieties can self-seed so easily that they become perennials. A fantastic alternative for growers in the South who have difficulty growing cold-loving perennials, this one is hardy to zone 8. Sowing the seeds in the autumn or winter is an option if you live in a warm environment.

Also read: How to Grow and care for Peonies 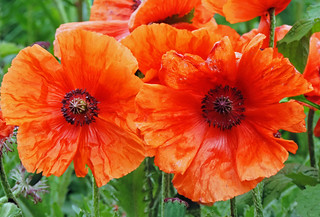 The Oriental poppy is perhaps the most well-known of all the poppy species. With its feathery leaves and fiery summer blooms in shades of orange, crimson, and salmon, rudbeckia is a frequent addition to northern gardens.

Oriental poppies’ feathery foliage is as beautiful as their beautiful blossoms. A fresh set of basal foliage grows in the autumn after the plant lies dormant throughout the summer. During the winter months, these leaves will provide visual appeal in locations where there is just a little snowfall. 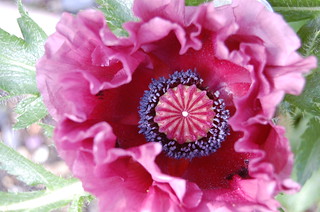 The late spring bloom garden is enchanted by juicy cherry and blackberry colors. Deer will not be able to get their teeth into this oriental poppy’s 6-inch flowers, which are supported by 30-inch stalks. Plants may self-seed, however, the resulting seedlings may not bear the desired purple flowers. To avoid self-seeding, it’s essential to remove wilted blossoms. To increase the number of oriental poppies, root splitting is the most effective technique. 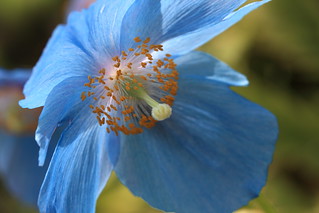 Wonderful things are on the way when the first Himalayan blue poppies begin to form buds. Congratulations, you’ve grown a Meconopsis poppy to maturity. Despite their sky-blue flowers, blue poppies have a mysterious allure. Before attempting this gardening prank, keep in mind that these flowers, which are critically endangered in their original environment, need constant moisture and moderate temperatures.

‘Black and White’ exotic poppy adds a dash of class and class to any gardening border. Crepe blooms in the black and white mix well in bouquets, but make cautious to burn the stalks with a torch to keep the milky sap from spilling into the vase water. 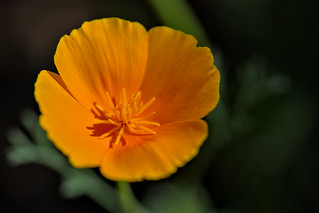 California poppies are produced as annuals in most places, completing their life cycles in one season. Wildflower gardens may benefit greatly from the drought tolerance and cheap cost of these North American wildflowers. ‘California Golden’, ‘Golden West’, and ‘Mission Bells’ are among the best cultivars. 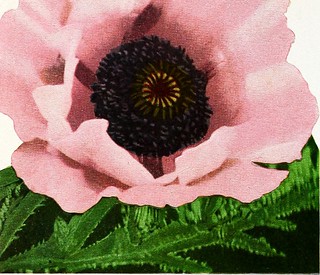 The ‘Helen Elizabeth’ exotic poppy is perfect for gardens in need of a romantic touch. The peachy-pink radiance radiates from the petals. Plant extra flowers around the plants after they have stopped flowering to fill in the space left by the foliage as it declines into summer hibernation.

This kind of poppy, known for its pom flowers and dappled pink hue, is a welcome change of pace for many gardeners. A variant of the opium/bread seed poppy that is an annual and may not generate the cream from which opium is obtained is known as this subtype.

However, you should be warned that cultivating any type of P. somniferum may attract the attention of law enforcement agents in certain conservative regions. Cultivation plant tubes or even tomato baskets may help sustain the large flowers of this poppy.

‘Black’ is a gardener’s dream for those who love the dark, melancholy look of black blooms. The peonies poppy is a kind of opium/bread seed poppy notable for its full-bodied blossoms that mimic peonies. An overcast day may make the darkest purple or maroon blossoms look almost black, even if they aren’t melanin-rich. ‘Black’ is an annual cultivar of opium/bread seed poppies.

Add black-bearded irises and black pansies to your black bloom display throughout the season. A stand of white wildflowers, like foxgloves, might also be used as a contrast. 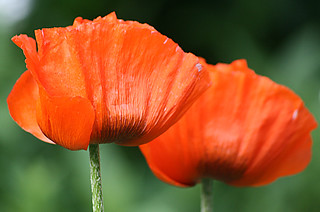 When it’s overcast outside, the orange glow of the oriental poppy ‘Orange Glow’ shines brightly. Plants can withstand temperatures as low as minus 40 degrees Fahrenheit, making them very durable.

Make your landscape shine with the most delicate salmon colors possible by planting a few ‘Khedive’ poppies. To add visual interest to the environment, don’t remove the decorative seed pods once they’ve finished blooming.

With four-foot-tall stalks, the ‘Goliath’ poppies shine bright in the summer garden. These plants will blossom for many years if they are placed in well-drained soil and direct sunlight.

‘Picotee’ oriental poppies could be a good fit in your flower garden. Double flowers with milk centers and frilled orange edges give any cut flower presentation a little something extra. The four to eight-inch wide bowl-shaped flowers have substantial size. 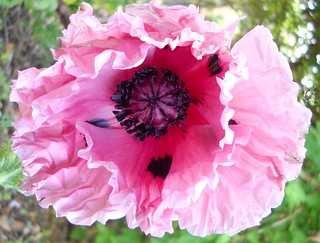 This variety is an exuberantly feminine bloom in texture, color, and name. During the summer, poppies’ withering leaves will be hidden by exquisite Gysophila baby’s breath.

‘Turkenlouis’ poppies are certain to steal the spotlight in your early summer or late spring garden with their glowing red petals accentuated by rich fringing. Gardeners seeking a low-maintenance perennial that attracts birds like hummingbirds may choose this poppy type.