Wisteria vines are the perennial vine that blooms annually from early spring to mid-summer. Wisteria vine takes seven to ten years to become mature. Once, it gets mature it produces a cluster of blooms in lavender or blueish color. Its flowers also spread fragrance in the surrounding.

However, many of its species are invasive. Growing this plant will be an excellent choice for your yard. This plant is easy to grow once it gets established. The only thing is that you have to prune it regularly to keep it in shape. 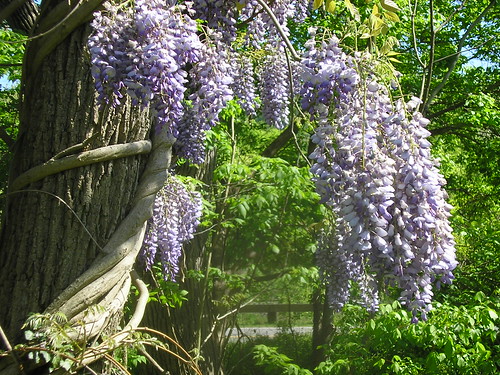 Wisteria is toxic to humans as well as to pets when ingested. These bluish-purple look beautiful and calm but when eaten in mass can affect our health. If you have kids or pets that have a habit of chewing leaves or flowers, avoid planting them.

Wisteria vine is an invasive species in at least 19 Eastern states from Massachusetts to Illinois south to texas.

How to grow wisteria 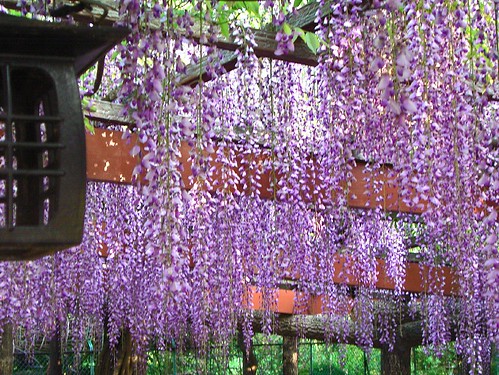 Where do wisteria vines grow best

Wisteria doesn’t like to relocate once gets established. It is a tree and takes up a large space when gets mature. Plant them outside, where they get constant sunlight and shade.

You can also begin growing them in pots. But, when its seedling becomes 5-6 inches taller, transplant it to a large area. Transplantation, when it gets too mature, will impact its overall growth.

When to grow wisteria vines

Wisteria usually takes around seven to ten years to produce blooms. It can tolerate all season and then get established.

But, in the beginning, it is not too strong. Plant them after the frost gets over or during early spring. This will give wisteria time to get settled before the next frost arrives.

How to propagate wisteria from seeds

When planted from seeds, wisteria can take about 7 to 10 years to produce its beautiful purple bloom. However, this is worth giving it to produce lovely blooms for years.

Wisteria’s self-grow then gets established, but in the beginning, it takes care of. 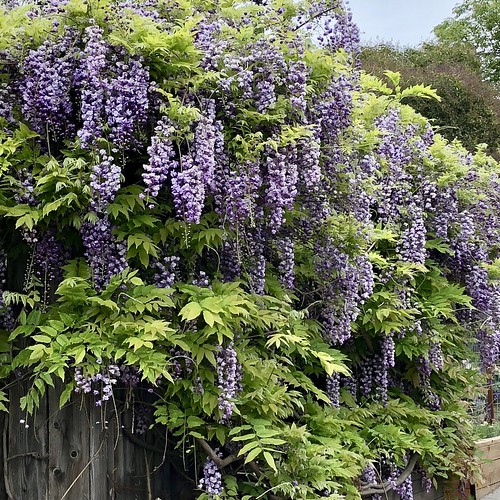 Wisteria vines prefer continuous sunlight. Plant them where they get at least six to eight hours of sunlight.

However, if the climate is extremely hot (during summer), they need partial shade. Ideally, plant wisteria vines where they get early morning sunlight and afternoon shade.

You can make a shade for the young or new wisteria vine to provide shade. Once wisteria vines get established they can tolerate intense sunlight.

Watering is very essential for young wisteria vines. It helps to strengthen the root system of the plant. However, one should avoid overwatering. Plant wisteria in well-drained soil and water only when its soil surface looks dry.

In the beginning, it needed regular watering. After getting mature wisteria vine becomes slightly drought tolerant.

You can stop watering in the rainy season or water once a week. The plant must get at least 1 inch of water per week.

Wisteria vines bloom become dull or begin fading color due to lack of watering. Also, when over water it can cause diseases like root rot that can kill the whole plant.

Wisteria vines do not like to transplant frequently. So, plant them where they can complete their life cycle. Plant them in rich, well-drained soil.

Also, wisteria vine-like slightly humusy, slightly acid soil. You can check soil pH with a test. However, it is not necessary to have an ideal pH level.

You can amend organic matter to improve soil quality. To improve drainage of the soil, mix organic matter like a banana peel, used tea bags, and make soil compost for good growth.

Wisteria flowering plants can tolerant winter. Wisteria vines can tolerate up to -20 degrees Fahrenheit. The plant can tolerate frost but its flowers get dry in the cold, making it flowerless during winter. The plant likes to grow in a high humidity climate but can also thrive in dry conditions when its soil remains.

Fertilizers are unnecessary for wisteria plants unless you planted them in poor soil. It’s better to amend a thick layer of compost at the beginning of the planting. Soil compost helps to improve soil quality and soil drainage.

However, if you wish you can feed them once each year until they mature. Feed them phosphate rich-fertilizer in minimal quantities.

Feeding them too much fertilizer will not yield in bloom. It will cause excessive growth of leaves and fewer flowers which can cause damage to the plant.

Pruning is the hardest part of caring for wisteria vines. They need pruning frequently to maintain their shade and size. If you do not prune them properly they can be overgrown.

Wisteria vines are invasive naturally, their branches can easily cover the nearby plants and structures.

Prune your wisteria plant during late winter, and remove at least half the part that has grown the previous year. Leaves at least one bud on each branch.

You will need to prune this plant once again during late spring or early summer to keep up its shape.

Cut off any dry or diseased part of the plant. If you cut the tree too far, it will regrow and sprout. However, it will take years to become mature and start blooming.

You can grow wisteria plants in pots with regular pruning. You can also train wisteria to grow like bonsai. For this take a pot slightly bigger than the plant. The pot must have an adequate drainage hole for good water flow. Fill the pot with potting mix soil and plant the wisteria on it.

Report the wisteria plant every two years for continuous growth.

Growing wisteria is easy when one stem plant is planted in a single pot. For a good approach train plant to grow in an up-down direction, you do this when giving support to its stem.

When the stem reaches the top of the stake, cut the tip of the stem. This will promote more growth. In winter, trim wisteria branches to a foot long. It will resemble a small plant in the coming season.

Wisteria vines grow hardy in hardiness zones 4 to 9. Usually, it does need winter protection when it gets mature. However, young wisteria vines protection. You can spread a thick layer of mulch on its root to protect it from winter.

How to get wisteria to bloom

Once the wisteria vines get mature (which takes up to 20 years) it produces annual blue or lavender-colored bloom during early to mid-spring, lasting about one month.

You can prune them as their fruits are toxic to both humans and pets. Otherwise, pruning is not necessary, it does not promote new growth and blooms.

The most likely reason why your wisteria vine is not blooming is due to high nitrogen soil. You can fix this by adding phosphorus-rich fertilizer. You can also do root pruning or remove some roots of the plant.

To reach the plant’s roots dip 3 feet in diameter from the trunk through the shovel. However, breaking roots too closely can kill the plant. Also, do not over-prune the plant and provide them adequate water and sunlight.

If you prune wisteria during the spring season you might remove growing buds. 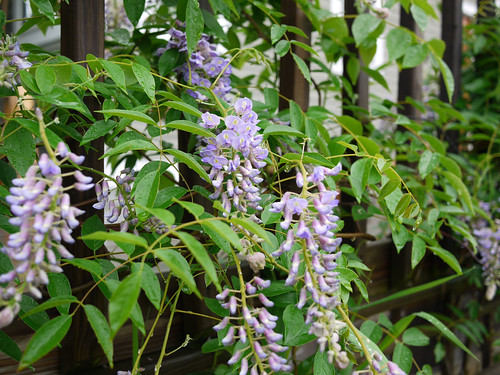 Wisterias are susceptible to common plant pests like Japanese beetles, mealybugs, scale insects, leaf miners, and aphids. Most of these plant pests can easily be removed by insecticidal soap or horticultural oil. Both methods help to get rid of these pests without any harm to plants.

There are pests like Crown gall, a soil-borne bacteria that can kill full-grown wisteria.

Crown gall overgrow on the stem and roots of the plant. It forms a brown round surface, which becomes woody with time. It is too similar to a tumor.

Removing this brown layer from the plant will not save the plant. Once it infects a plant it kills it.

However, you can protect your plant, if it is infested only on one branch or part of the wisteria. Cut down infested to stop spreading it further.

If your plant is young or strong, it can fight this bacteria and stop it from spreading to the whole plant.

Wisteria also gets infected by leaf spots. It is a fungal disease that causes yellow spots on the leaves. It does not spread and kill the plant but can make leaves turn yellow and dull.

You can get rid of this by removing infested leaves from the plant and applying a spray of horticultural oil like neem oil.

Wisteria species get hardy once mature. It takes several years to get mature in ideal conditions like moist soil and good sun exposure. However, with changes in weather and season. Wisteria faces many problems. Some of the common problems are described below. If your plant is suffering from any of these problems, this helps guide you to cure it.

Soggy soil often causes yellow leaves. This happens when plants get overwatered. To avoid this problem use well-drained soil and water only when the soil gets dry.

To improve the drainage of the soil you can amend organic matter.  Yellowing leaves also occur when soil becomes alkaline. You can identify soil pH with a test. Add peat moss to make the soil slightly acidic. The foliage of the plant also turns yellow naturally when the temperature gets cool in the fall.

When leaves from mottled discoloration it is a sign of a rare disease called tobacco mosaic virus. This virus has no cure, you can only remove the infested part to stop them from further spreading.

The plant often dies back or disappears. This mainly happens due to a lack of water or overwatering. If your plant is showing these symptoms, you need to change your watering habits. First, check the drainage of the soil. You can improve soil quality by amending organic matter to it.

Soggy soil due to overwatering can cause root rot. This will kill your plant gradually. To fix this water only when the soil is dry.

If you live in a hot region, spread a thick layer of mulch around the root. This will help to retain moisture in the soil.