Artemisia is a woody perennial sub-shrub grown as an ornamental plant for its fragrant, silver foliage. The plant can thrive in poor conditions, usually thriving in USDA hardiness zone 4 to 9.

Artemisia genus contains about 300 species, including annuals, perennials, and even woody shrubs. But, species grown as ornamental plants are mostly herbaceous perennials.

These species are grown as foliage plant that features filigree-like leaves.

In this post, you’ll learn everything about artemisia plants; how to propagate, grow and care guide.

The Artemisia plant’s scientific name is Artemisia absinthium. This plant is commonly known as mugwort or wormwood. Wormwood is often considered an herb used for culinary or medicinal purposes.

According to NCBI Artemisinin from the artemisia plant; used as artemisinin combination therapy (ACT) is the current best treatment for malaria.

Most of the species have a sweet scent but a bitter taste that deters animals from eating them, but useful ones have essential oils.

When to plant wormwood

If growing from seeds, plant the seeds in the pot 2-3 weeks before late frost indoors. Planting indoors will give shelter to plants and protect them from frost.

Bring the pot outside once the threat of frost is gone (early spring). You can easily transplant the potted plant in the garden for a big size.

Where to plant wormwood

Wormwood can grow in average, well-drained soil with a neutral ph level. However, the plant does not like to stand in water or remain wet for too long. Ideally, plant in a good drainage soil or area. If planting the pot make sure it has adequate drainage holes and soil. (Balance mix of soil and sand).

How to Grow wormwood Plants in pots

If you are a beginner or growing wormwood for the first time. Planting in the pot is the easiest way to start. In the pot, you get the flexibility to change place location and get a fixed growth.

Wormwood is a popular foliage ornamental plant that looks stunning in compact pots with proper care. However, the plant can be easily transplanted or propagated through division to grow many more.

Below are step-by-steps of growing wormwood in pots:w

If you’re interested in growing foliage plants; Here are the 19 Most Beautiful Foliage Plants To Grow Indoors or Outdoors.

How to care for Wormwood plants indoors

Although, wormwood is a tough condition-tolerant plant. However, when you grow them as ornamental plants indoors or outdoors they require some care to sustain their beauty. 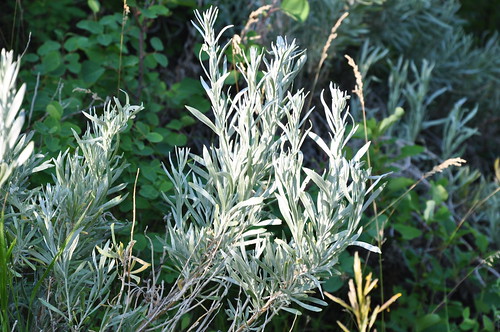 Wormwood does best in full sun. However, the plant can also grow in partial shade but needs at least six hours of direct sunlight.

Planting in a shady area will make its leaves wilt and stunt growth. Ideally, they should be planted in areas that get early morning sunlight and afternoon shade.

Especially in the hot summer, plants need afternoon shade to protect them from harsh sunlight.

If you are growing wormwood in a pot or container, place it in a shiny area near the windowsill or beside the door to provide enough light.

The amount of light and heat the plant is receiving also decides its water requirement.

Regular or frequent water is essential to growing any plant. However, wormwoods are water tolerant once they get established. At the beginning or when you plant wormwood; it requires regular watering to sustain.

Water keeps the soil moist, they do not like to stand in water. If planted in a pot or container make sure it has good drainage. Watering too much will cause root rot.

To be safe, water only when the upper layer of the soil looks dry, water once thoroughly and wait to get it dry (may take 2-3 days).

You can do this till it gets hardwood or stem, after that it becomes water tolerant and can sustain without for weeks.

Also, water is directly in the base of the plant without wetting its leaves and stem. Wet plants for a long period can suffer from fungal diseases or insects.

Wormwood can grow in any average, well-drained soil. The only requirement is that the soil should have good drainage. Do not place where water stays.

You can use ground soil, but do not sand with full stones or pebbles. If you emerge in damp soil, they will decline or have short lives.

Pruning wormwood encourages more leaves and blooms. It should be pruned in the spring to have branches. Pruning will keep their size checked and look neat.

Wormwood is usually grown for its foliage, its blooms are often snipped off to redirect energy to grow new foliage.

As we discuss wormwoods are an exception that does not have rich soil. Since they do not have rich soil, there is no point to fertilize. Just occasionally damp some organic matter in the soil bed such as the banana pill and eggshells.

Wormwood generally does not have any compound present which is poisonous to animals like dogs or cats and then ingested. However, Artemisia dracunculus is an exception that is clearly evidence to be toxic to dogs and cats.

If we see the official evidence artemisia is listed as class 4 toxic, meaning they can cause skin irritation when contacted.

There are also some studies that the concentrated artemisinin oil, sometimes used as a medicinal remedy or an ingredient in cancer medicine, may lead to liver damage.

But, such a thing won’t happen if accidental ingestion of garden plants. Some common plants or flowers are actually poisonous. Check the list of beautiful flowering plants that are poisonous.

How to Propagate Wormwood Plant 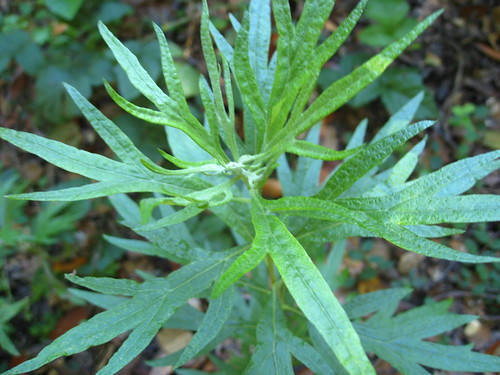 Wormwood or artemisia plants can propagate from divisions, seeds, and stem cuttings. However, some cultivars or hybrids are sterile (infertile) and others will not grow from true seeds.

If you try to propagate from seeds, chances are the plant will not grow or do not grow similar to its parent plant. The simple way to propagate wormwood is a division from root clumps which offers a faster and most trouble-free method.

How to divide the artemisia plant?

Divide the plant every 2 to 3 years or when the middle of the plant starts dying. To divide, toss out entire plants which are helped to stand. Divide root clumps into two different sections and replant them in different locations. This way you will end up with multiple new and fresh wormwood in the garden.

Wormwood is quite resilient to pests in ideal conditions. Because of its strong scent, pests avoid coming closer to artemisia. But, it is prone to many fungal diseases and rust like powdery mildew, downy mildew, and white rust. Usually hot, humid climates create these problems. Planting wormwood in an open area with good airflow reduces the chance of diseases. if your plant is suffering from fungal diseases; read our guide on How to get rid of powdery mildew.

Patience is the key factor for harvesting. Many gardens suggest harvesting wormwood after 2 years of planting, as the strength of the herb and potency increase with its maturity.

There are many ways to use artemisia aside from absinthe. You can make potpourri ingredients by using upper stalks or harvesting the soil to make powerful antiseptic or organic pest spray.

Artemisia or wormwood is grown as an ornamental plant. There are hundreds of varieties and cultivars of this plant that can be beautiful around. Below are some of the artemisia varieties that you can consider growing indoors or outdoors:

The variety is commonly called canyon sagebrush. The plant grows up to 2 feet taller in height and spreads about 10 feet which makes them an excellent ground cover plant. Canyon Gary is hardy in USDA zones 9 to 10.

Mugwort is a sage or mint variety that has an aroma and flowers. The plant grows 2 to 4 feet taller in height and produces greenish-white blooms in mid to late summer. It can grow hardy in zones 5 to 10.

Powis Castle is an upright growing variety reaching 2 to 3 feet in height. It has gray-silver fern-like foliage, hardy in USDA zones 7 to 10.

Silver king is a fast-spreading variety with bright silver-white leaves that turn reddish in the fall. The plant grows up to 4 feet in height and is hardy in USDA zones 4 to 9.

This variety has woody white leaves, it is a low-growing plant that grows about 6 to 8 inches taller and spreads 1 foot. The variety is often planted in containers or into crevices of retaining walls.

Seafoam is a low-growing plant, spread 8 inches with billowy silver foliage. It is hardy in zones 40 to 10.

The silver mound forms a 1-foot mound of soft texture light green foliage. The variety is hardy in zones 5 to 10.

Did I Miss Anything?

Now I’d like to hear from you: which tip from today’s post are you going to try first? Or maybe, I didn’t mention your favorite plant-growing tip. Either way, let me know by leaving a comment below right now.

Before going if you want to grow beautiful flowers in your garden? Then click on these articles also.